The article presents rationale of the possibility to increase the basic parameter of parameter field development – the factor of oil recovery from reservoirs designed and exhausted (suspended) deposits with use of new developments and advances in technology.

It is appropriate in this period, as the developed fields run out of normal "light" crude oil at the backdrop of declining reserves replacement level due to new discoveries of medium and light crude oils. In recent years the oil industry has tended to increase the oil resources mainly represented by hard-to-recover high-viscosity oil reserves. As the volume of the extraction of "light" crude oil is decreasing everywhere, the deposits face the transition to the so-called ending stage of development.

The project "Secondary mining of depleted oil fields Shubarkudyk and Zhaksymai, which provides for the introduction of advanced technologies and new products in the processes of development of fields that had not been previously additionally produced, and extracting from them hard-to-recover residual oil.

Due to the depletion of medium and light crude oils, the oil and gas industry will have to pay more attention to the development and commencement of industrial development of heavy hard-to-recover viscous oils. Extraction, preparation and transportation of such oils are often complicated and sometimes impossible due to its low mobility due to the high viscosity of such oil.

The area of scientific activities is expanding when entering heavy high-viscosity oils into the development. Globally, light crude oil is produced in the volume not exceeding 50%, high viscosity heavy oil production ranges from 10% to 30%, depending on the characteristics of oil, water and reservoir [21].

In the near future, the reduction of oil production level is expected in the oil prospective areas of the world that have been developed for a long time. This is happening against a background of declining reserves replacement level due to new discoveries of medium and light crude oils.

In this connection, and taking into account the growth in energy consumption, it is necessary to increase the oil recovery factor on fields under development and enter into the development the new fields of light and exhausted (suspended) deposits of heavy crude oils. According to the International Energy Agency (basic version), the global primary energy demand will grow at an average annual rate of 1.5% per year, and by 2030 will increase by almost 40% compared to the year 2007, which reached historical maximum fuel consumption of energy resources [12]. Today it is time to combine the achievements of the past and present. It is clear that the effect of this will more than double.

The project “Secondary development of exhausted oil fields Shubarkuduk and Zhaksymai” is the first industrial innovative project in the oil industry of the Republic of Kazakhstan aimed at removing hard-to-recover reserves, was formed in KANTAR OIL LLC and submitted to the oil agency at the beginning of 2012 and is awaiting for review until now. Accordingly, no new progressive developments for implementation of oil production from hard-to-recover reserves are created and tested in the oil industry, including from residual oil from abandoned (suspended) fields.

The reserves of oil after oil field development can be categorised as residual oil reserves.

The main reasons for the formation of residual oil are [15]:

The predominant type of residual oil in many respects determines the choice of methods for its production from the reservoirs.

The hard-to-recover reserves include the reserves [21]:

And at the same time, all of the above categories provide no clear definition of hard-to-recover reserves.

Deposits of Shubarkudyk and Zhaksymai are suspended. Many wells are depressurised, there are puddles of oil in wellhead areas, and gas leaks through a bed of downhole oil out into the atmosphere. The density of oil in reservoir conditions depends on the amount of dissolved gas, temperature and pressure [2]. With the increase of temperature and the amount of dissolved gas, oil density and viscosity decreases. High viscosity oil at low temperatures show a highly pronounced non-Newtonian (viscous plastic, viscous elastic, thixotropic) properties (see Figure 1, 2), without regard to which it is impossible to organise rational exploitation of wells, collection, preparation and transport of oils[18]. 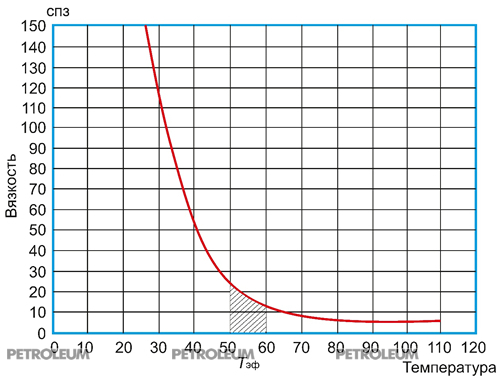 Note: the temperature of the reservoir is 28 0C; effective temperature is 50-60 0С, the average value of oil viscosity in reservoir conditions-150 cPs.

Highly viscous oil are more susceptible to lower viscosity when heated. An increase in temperature in the reservoir up to 120-1500C contributes to viscosity reduction from 1000-1200 MPa·s to 3-4 MPa·s (see Figure 2). 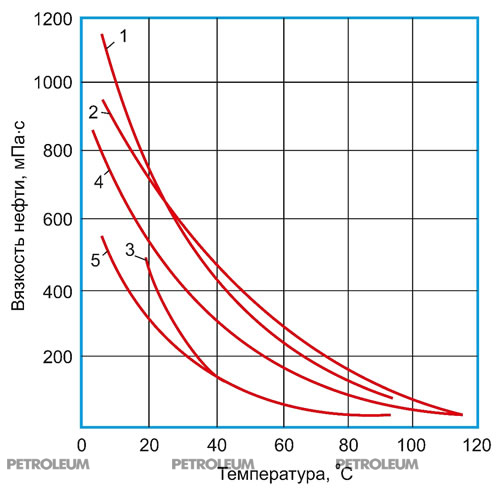 In Kazakhstan, it is advisable for us to establish our own technology to develop the hard-to-recover deposits with reserves than use the ones created by others on other continents trying to adapt them to our environment.

World energy situation is that until 2050 energy consumption in the world is to double. At the same time, the increase in the production of readily available oil hardly keeps pace with demand already today. It is expected that the peak of production of the traditional light crude oils will be achieved already in 10-15 years, and subsequently their production will fall [3]. Therefore the oil industry today needs to pay attention more often to heavy oil and bitumens.