Results of the Year

November 7, the Chairman of the Board of the national company KazMunayGas Sauat Mynbayev commented on the Paradise Papers offshore scandal. "At the moment, I am not a shareholder at Meridian Capital”, noted in response to a request of Interfax-Kazakhstan.

On November 6, the international consortium of investigative journalists published so-called Paradise Papers - documents relating to offshore companies, associated with many political figures from different countries. According to the publication of the consortium, Mynbayev is a shareholder in Bermuda-registered company Meridian Capital Ltd. Thus, according to the documents, in 2011 he owned 20%, and the company itself in 2006 owned assets worth more than $3 bln.The Chairman of KMG in response explained that in early 2000s he resigned from the Government structures moving to the private sector. "During this period, Meridian Capital was established, at that time I was one of the shareholders of the company. In 2003, I was again invited to the civil service, since then, in accordance with the law, I transferred my share to third parties", said Mynbayev.

According to the head of KMG, he listed the share in Meridian Capital in a tax declaration, which “was submitted over the years, as civil servants must do, and never hid that information. Declared income derived from the activities of Meridian Capital. All data is available to fiscal authorities of Kazakhstan”.

November 7, General Director of Pavlodar Petrochemical Plant LLP Shukhrat Danbay has been relieved of his position.  Such a decision was passed by the Board of Directors of KazMunayGas Refining and Marketing JSC.


Ospanbek Alseitov was appointed as Acting General Director.
In early November, the Energy Minister Kanat Bozumbayev during the meeting on the modernization of the PPCP demanded that it must be complete before November 8, threatening that in case of failure the top-managers of the plant will be laid off.

November 8, national company KazMunayGas under the comprehensive plan of privatization for 2016-2020, has sold 100% of the shares of the subsidiary company Euro-Asia Air JSC to a private investor Sky Logistics Service LLP. The buyer was identified through an open competitive tender, the company noted. The sale price amounted to 11.85 bln tenge. Euro-Asia Air is a 100% subsidiary of KMG. The main activities are: the provision of air services to legal and physical persons; flight operations for development and prospecting services, gas pipelines and power lines.

Russia and Kazakhstan signed an additional protocol to the Protocol to the agreement on the delimitation of the seabed in the northern part of the Caspian Sea. The document was signed by Russian President Vladimir Putin and Kazakhstani President Nursultan Nazarbayev. Previously, the Russian Government has approved a draft of additional protocol with Kazakhstan for signing the Production Share Agreement (PSA) on Kurmangazy field at the Caspian shelf. The draft of protocol provides for an increase in the contract territory, providing an additional period to the enterprise for prospecting for 6 years, with an option to extend it for up to 4 years, setting the date of the signing of the additional agreement to the PSA dated July 6, 2005, as the date for the start of the additional period of prospecting.

In 2003, the Government of Russia appointed RN-Kazakhstan OOO (100% owned by Rosneft oil company) as designated authority from the Russian side for the joint with Kazakhstan development of hydrocarbon resources of Kurmangazy structure (Kulalinskaya) on the shelf of the Kazakhstani sector of the Caspian Sea. Moreover, option to participate in joint venture at a rate of 25%, was assigned to the Russian side (Zarubezhneft). National company KazMunayGas (50%) became designated authority in the project representing Kazakhstan.

November 16, shipping through Kazakhstan of  Russian oil destined for transit to Uzbekistan, on route Omsk-Pavlodar-Shymkent-Shagyr oil loading point (poured into railway tanks), were launched.  In November, based on schedule, the volume of transit will reach 30 thous. tons, and by the end of the year it is planned to deliver 80 thous. tons of oil.

Aktau bitumen plant Caspi Bitum is a joint venture of KazMunayGas-Refining and Marketing JSC (50%) and the Chinese CITIC Kazakhstan (50%), commissioned in December 2013.

November 24,national company KazMunayGas, Gazprom PJSC, Gazprom Export LLC and KazTransGas have finalized and signed a protocol on cooperation in the gas industry in 2018 following negotiations in Almaty.  The document was signed by Kairat Sharipbayev, KMG executive vice president for gas transportation and marketing and Aleksandr Medvedev, deputy chairman of Gazprom PJSC management board. The agreements provide for partnerships and collaborations in the areas of refining, supply to the domestic market, export and transit of gas. In addition, the protocol envisages increasing gas exports to Russia compared with previous years. At the beginning of 2017, it was reported that the agreed delivery volume of Kazakhstani gas to Russia in 2017 will be about 12.8 bln cubic meters.

By the order of the President of KAZENERGY Association Timur Kulibayev, Aset Magauov appointed as General Director of the Kazakhstan Association of oil-gas and energy sector organizations KAZENERGY, starting from December 4, 2017. Magauov replaced Bolat Akchulakov at this post. Prior to this assignment, Magauov served as Vice Minister of Energy. On October 10, by the Decree of the Government of Kazakhstan, he was removed from his position amid formed gasoline shortage crisis. Magauov previously headed KAZENERGY Association from 2012 to 2016.

December 6,as part of the Industrialization Day President Nursultan Nazarbayev during a teleconference has launched several new industrial objects. In particular, one of them was the launch of construction of gas dehydration plant in Bozoi underground gas storage in Aktobe Region. Project cost is 11.2 bln tenge. Underground gas storage Bozoi is part of Intergas Central Asia JSC.  Active storage capacity is 4 bln cubic meters of gas.

On the same day Kazakhstan Petrochemical Industries Inc. LLP began construction of integrated gas chemical complex in Atyrau Region. Project cost is 915.6 bln tenge, the commissioning date is the year 2021. The design capacity of the enterprise is 500 thous. metric tons of polypropylene a year. Kazakhstan Petrochemical Industries Inc. is the operator of the project "Construction of the first integrated gas chemical complex in Atyrau Region”, established by the Government Decree No. 101, dated January 29, 2004. Participants of the partnership are: United Chemical Company LLP (51%) and Almex Plus Firm LLP (49%). The only participant in United Chemical Company is the National Welfare Fund Samruk-Kazyna. Almex Plus Firm LLP is a private investor, the company is part of one of the largest holding groups in Kazakhstan - Holding Group ALMEX JSC.

Also, the production of metal constructions using robot welding was launched in Atyrau Region.  The project is implemented by private Zhigermunaiservice LLP,  involved in the manufacture and repair of drilling, oil field and non-standard equipment, as well as tools and spare parts.

On the same day, Kazakhstan Oil Equipment Plant JSC began construction of a plant for the production of oil and gas equipment and pipes in Aktobe Region.

KazMunaiGas-Refining and Marketing JSC is consolidated to its parent company NC KazMunayGas, said in KMG statement published on the website of the Kazakhstan Stock Exchange. Accordingly, the changes to KMG Charter were made, broadening its activities.  Earlier, Chairman of the Board of KMG Sauat Mynbayev stated that KMG plans to simplify the legal structure of the company.

The Shymkent Oil Refinery (PetroKazakhstan Oil Products LLP) switched to production of diesel fuel of environmental class K4 and K5 based on the requirements of the Technical Regulations of the Customs Union. "To date, we have established pilot batch of fuel, certificates of quality completed for products and public authorities released Declarations of conformity to the Technical Regulations of the Customs Union", stated in the message of the company. As reported, starting from July of 2017, the plant started production of high-octane gasoline of environmental class K4 and K5. Currently construction of the second phase of the modernization project is in the stage of completion, aimed at increasing the capacity of the plant to 6 million tons per year and the conversion rate. The project is scheduled to be complete in September of 2018, said in a statement.

According to the Ministry of Justice of Kazakhstan, for the past four years the Republic of Kazakhstan has been involved in a series of foreign judicial processes in relation to arbitration proceedings initiated by Anatol Stati, his son Gabriel Stati, as well as their companies Ascom Group S.A. and Terra Raf Trans Trading Ltd. with stated claims worth over $4 bln. The arbitral tribunal settling the dispute in Stockholm (Sweden), on December 19, 2013, awarded about $500 mln in favor of Stati. Kazakhstan   accuse Stati in inflating the cost of a gas processing plant in Kazakhstan through a series of transactions with undisclosed related parties and submission of fraudulent financial reporting.

The Ministry of Energy of Kazakhstan, Eni and KazMunaiGas signed the agreement to transfer to Eni 50% of the subsoil use rights for exploration and production of hydrocarbons of the Isatay block, located in the Caspian Sea.As indicated in the message of the Ministry, operations in the licensed territory will be carried out by Isatay Operating Company, jointly established by Eni (50%) and KMG (50%).
As it was reported in June of 2017, KazMunayGas and Italy's Eni signed a number of documents, one of the agreements related to update p the conditions for the transfer to Eni of 50% subsoil use right in the contract for the combined exploration and production at the Isatay block. The Isatay block is located in the basin of the Kazakhstani sector of the Caspian Sea, 45 km north of the coast of Buzachi Peninsula.Water depth at the Isatay block is 4-8 m.

Azerbaijani-based company Global Energy Solutions (Glensol), one of the leading providers of maintenance and integrity solutions to the oil and gas, power and water, chemical industries launched its operations in Kazakhstan by opening office and workshop facility in Aktau.  Established in 2012 as an oilfield operations and equipment maintenance subsidiary of Nobel Oil Services, Glensol specializes in oil field exploitation and equipment maintenance. Glensol provides asset integrity management, operational assurance services, maintenance and repair services for turbomachinery, valves and pumps SOCAR, BP and other major companies are among its customers.

December 27, President of Kazakhstan Nursultan Nazarbayev signed the Code "On Subsoil and Subsoil Use".


The document provides for introduction of international system of natural resources calculation standards and a simplified method for conclusion of subsurface use contracts and aims to systematize norms of legislation in the field of subsurface use to improve investment attractiveness of the industry. Innovations of the Code are introduction of Australian model for granting subsurface use rights based on the principle of "first come - first received", transition to international system for natural resources calculation, geological information assurance, development of program for management of state fund of subsurface resources.

In addition, the document is aimed at stability assurance of subsurface use conditions through establishment of relevant provisions in regulations governing the content of licenses and contracts. 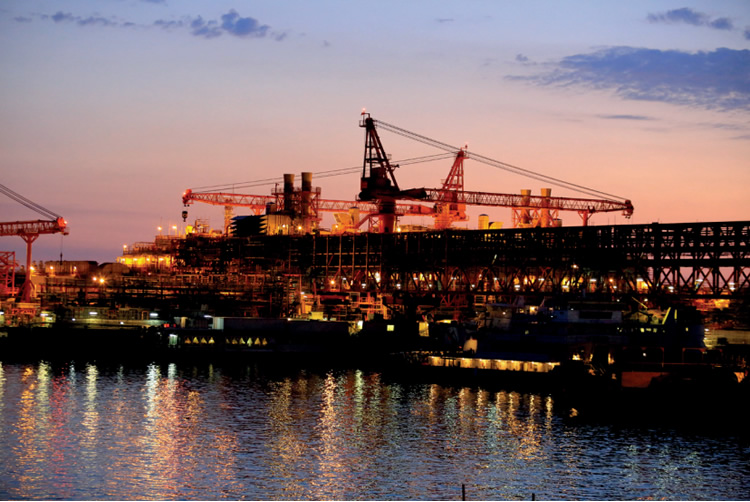