Kashagan: What Lies Ahead for Kazakhstan’s Main Oil Project

The North Caspian Project is the first large project of offshore oil and gas field development in Kazakhstan. The giant Kashagan field is one of the largest oil fields discovered in the last four decades. Its recoverable reserves are approximately 9 to 13 billion barrels (1 to 2 billion tonnes) of oil. In 2016, the commercial development of the offshore field commenced in the Caspian Sea. This year, the oil industry workers are celebrating the 25th anniversary of the project. 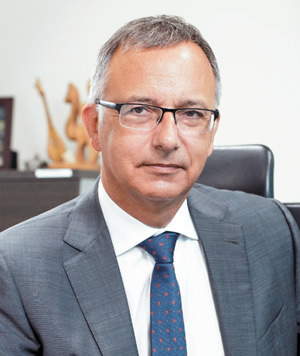 How has the project developed over the quarter of a century since its initiation? What is happening at the field today? What are the Consortium’s plans regarding its further development and capacity ramp-up? Bruno Jardin, Managing Director of North Caspian Operating Company N.V. (NCOC) Consortium, gives his answers to these and other questions.

— This year we mark the 25th anniversary of our project. I would like to express my gratitude to all employees working at Kashagan and to the project veterans. They have brought the project into life. Thanks to the efforts made by each of our employees, we have reached the actual production rate of 320 thousand barrels per day while observing the operational safety requirements, and the general operational reliability remains high and continues to exceed our expectations.  This is not only one of the world’s largest integrated oil and gas field development project, but probably one of the most complex projects from the engineering standpoint. The people who initiated this enormous project were apprehensive about the great challenges associated with its implementation. But today, after many long years of meticulous work, we all see how the project develops. The field has been started up.  On October 14, 2016, the first products were exported via the CPC pipeline system. In November, the final declaration was issued on commencement of commercial production under the Kashagan project. This achievement is a historic milestone of the project both for the shareholders and for independent Kazakhstan.  Since production restart in 2016 and up to the present day, the Consortium has produced about 16 million tonnes of oil and condensate, above 5 billion cubic meters of gas, and has exported more than 700 thousand tonnes of sulphur. The sales sulphur export began on October 28, 2017 when the first trial sulphur export train left the newly-completed Eskene West Rail Facility.

— What are the difficulties associated with the project and how are they being dealt with? How many wells have been drilled and how many are currently on-line?

— With the start of gas re-injection in August 2017, we are now learning a great deal about how the reservoir reacts and we are using that to improve our production plans. As you know, the drilling campaign was completed in 2016. The number of wells currently on-line depends on daily operational situation and will constantly vary according to the production rate. To date 40 wells have been drilled, only some of them we use to maintain today's production level.

— Which routes are being used to export raw products to the global market? When do you plan to reach full design capacity?

— Oil is exported via the Caspian Pipeline Consortium’s newly-expanded Atyrau – Novorossiysk pipeline network. Its capacity is sufficient to receive the full volume of our products. Other routes are not currently being used.  Regarding the design capacity, our task is to reach the production rate of 370 thousand barrels per day. We hope to attain this target at the earliest. Our production rate will be ramped up step by step. Internal studies are also carried out so that we can exceed the current target.

— How would you assess the contribution of the Kashagan Project to Kazakhstan’s economy?

— The Kashagan Project makes an invaluable contribution to the Kazakhstan’s economy. The Project will have a production life of decades and during this period the Kazakhstan’s economy will realize financial benefits in terms of taxes and the Kazakhstan share of production. We are talking about ‘billions’ of investments. In fact, billions of dollars have been already invested under the Project. As the country’s largest direct foreign investment project, the North Caspian Project has a powerful multiplier effect on the economy, creating employment opportunities for Kazakhstan specialists and opportunities for local companies. In 2017, the overall amount spent from 2004 on local goods and services had totalled US$13.7 billion. The amount spent for local goods manufacturers was US$330 million and we reached a local content share equal to 32% of the total expenditures. In addition, the North Caspian Project each year allocates a budget for implementation of social infrastructure projects in Mangystau and Atyrau Oblasts where the Company activities are centered. As of today, the Kashagan Project has directly contributed over half a billion US dollars for the benefit of local communities. About 200 projects have been implemented to date. This means construction of social infrastructure facilities, such as sports grounds, kindergartens, schools, hospitals, residential buildings, gas supply networks. Also, 16,000 Kazakhstan citizens have received training and improved their professional level on various disciplines. With the knowledge gained they now greatly contribute to the Kazakhstan’s economy. Over two decades, the Operator has spent in total about US$255 million on professional training to build and develop local workforce.

— How does the Consortium assess the options for further phases of Kashagan development?

—The Kashagan field is one of the largest and, at the same time, one of the most technically complex projects for implementation. Thus, the decision was taken to develop it in phases. To date, we are about to complete the construction works at Phase I facilities. At the same time, we keep abreast of the situation and look into the future. We are working to determine the optimum development options and schemes for the future phases. We are considering a wide range of opportunities available to us. Not only as related to the Kashagan project. We turn our gaze on development of other structures and fields. Such as Aktote, Kairan, Kalamkas. We are working on these subjects meticulously. We are also looking at construction of new drilling islands under the Kashagan Project to ramp up hydrocarbon production.

— How would you describe the North Caspian Consortium’s remarkable journey since it first started to work 25 years ago?

— The development of the Kashagan field has been the first major Offshore Oil and gas development in North Caspian, and, as I mentioned before, it has been a very large and complex project. As the veterans of the project noted, the offshore oil industry of independent Kazakhstan was just emerging. There was nothing but a dream that oil could be found. And even if it were, almost none of the infrastructure, equipment and people needed for offshore field development existed here at that time.Since then, this dream has become reality.  The Production Sharing Agreement was signed in 1997, paving the way for the largest foreign direct investment project in the history of independent Kazakhstan.  Five new offshore fields were discovered including Kashagan, still one of the largest in the world. Tens of billions of dollars were invested into the project over these years. This facilitated establishment of the completely new offshore oil and gas service industry in Kazakhstan.

— Despite­all the difficulties, can you say that Kashagan is the main project of your career?

— It has been an honour and a privilege to be part of this extraordinary project currently implemented in Kazakhstan. Thanks to this project, I had an opportunity to meet many people, veterans, who were the originators of this project. I’ve spent more than 35 years working on various large oil projects throughout the world. This project is special for me. It is a great honour to lead this project. Today, as we are celebrating the 25th anniversary of the project, I would like to thank all specialists, all people who managed to travel this challenging path and achieve unbelievable results. Theyaretrueprofessionals.