Magzum Mirzagaliyev, the Energy Ministry: By the End of Year Domestic Market Demand for Oil Products Will be Fully Satisfied 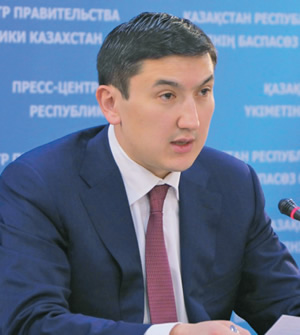 The large-scale reconstruction of three domestic refineries has been completed. Deputy Minister of Energy Magzum Mirzagaliyev told about the role of modernization and prospects for expanding the production capacity of the plants in an interview with Рrimeminister.kz.

– Tell us, when was the modernization of each of the three oil refineries in Kazakhstan completed? When did the renewed enterprises start working?

In March 2018 the main installation of the catalytic cracking complex was launched, as a result of which the production of high-octane automobile gasoline was increased more than twofold.

Regarding the reconstruction and modernization of the Shymkent Oil Refinery, the first stage was completed in June 2017, the second – March 15, 2018. To date, mechanical completion has been achieved and commissioning is underway. The planned completion date for commissioning is September 2018.

– Magzum Maratovich, what did the modernization give today, when not so much time have passed? Why was modernization necessary and how has the situation on the fuel market changed (and will change in the future)?

– The Atyrau Refinery modernization project gave the following effect: for the first time in Kazakhstan, the production of basic petrochemical feedstock – benzene and paraxylene – has increased; the extraction of high-octane gasoline has grown from 260,000 tons per year to 600,000 tons per year; 100% production of K4 / K5 clean diesel in accordance with the requirements of the Technical Regulations of the Customs Union has been achieved. In addition, it became possible to use the complex in the fuel and petrochemical modes, depending on the needs of the domestic market.

With the launch of the catalytic cracking unit in March 2018, the production of commodity high-octane gasolines at the refinery increased more than twofold.

The effect obtained from the implementation of the modernization project: production of motor fuels of ecological classes K4, K5; production of aviation fuel and 100% high-octane gasoline; the possibility of processing West Siberian oil in the volume of six million tons per year and up to 4.7 million tons of West Kazakhstan oil per year.

With the completion of the first stage of reconstruction and modernization of the Shymkent Oil Refinery, the production of motor fuel was provided in accordance with the ecological classes K4, K5, and also 100% of high-octane gasolines; an increase in the production of high-octane gasoline from 660,000 tons in 2016 to 881,000 tons in 2017 was achieved.