The Complexity of Exploration and Investment in it Will Only Grow

Geologist. The profession is not only romantic but also incredibly responsible. After all, representatives of this profession are assigned a strategic task to find deep underground oil and gas reserves, which will be extracted and processed by a team of oil and gas workers. There is no future for an oil-producing company if there will be no permanent replenishment of reserves.
Representatives of the PetroKazakhstan Group of companies – Director of Kolzhan LLP, which is part of the Group, Abudurexiti Tuerxun, as well as two employees of the Department of Geology and Geophysics of PetroKazakhstan Kumkol Resources, Deputy Chairman of the Management Board for Geology and Geophysics Agzam Sharmenov and Deputy Production Director Ming Haihui talk about what they think are the most important things about being a geologist and what the potential is for the South-Turgai basin. 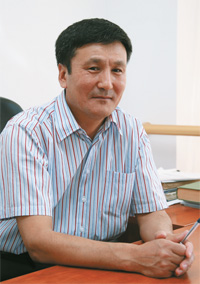 "Oil is called the blood of the industry, a source of energy, black gold, and it plays a significant role in many countries’ economies. Oil is the property of our planet. It occupies a leading place in the global fuel and energy sector, " – says Ming Haihui. – Energy consumption is continuously growing. The need for affordable clean energy has always been high, and geologists help meet this need. They can identify the most promising geological exploration areas, prospecting, exploration, appraisals, additional exploration, pilot operations, and development of oil and gas fields. If you want to change the world and help it develop, there is no better way than to become a geologist."
Agzam Sharmenov joins the conversation: "In addition to gaining experience on the job, the geologist needs to expand his understanding of the relationships between the structural elements that build the geological time. For example, to study the Caspian Sea oil and gas region, which is a massive basin in Kazakhstan and Russia incorporating the Tengiz, Zhanazhol, Kashagan, and more than 200 other fields, geologists should also know that the Caspian Depression is a part of Russian platform – the oldest on the planet.
The crystalline basement of the Caspian basin is located at a depth of 15-20 kilometers. The Russian platform’s ancient rock crops out at structural elements such as the Baltic fundamental crystalline formation, Ukrainian massif, Voronezh knoll, and Tatar anticline.
To study the Balkhash-Alakol, Ili, and Zaisan sedimentary basin for oil and gas potential, geologists need to understand the Altai fold system, which incorporates the Altai mountains, Altai ore, Zailiskiy Alatau, Dzhungar Alatau, Ile Alatau, Kungei Alatau, and others. In Central Kazakhstan, Turgai is linked to the Mugadzhar shift fault and Ulytau range, and North Turgai is connected to the Ural fold system. Knowledge of the tectonic element formation period is instrumental, so geologists are continually looking to better understand the planet.
And if you think about what the future holds for us? Geologists are faced with the task of making decisions for the future. Well-known fault lines such as Central Turgai, Main Karatau, and the Amangeldy transcontinental deep faults and several less famous ones cross the South-Turgai basin.  Like roots in the foundation body, deep faults play a role in heat and mass transfer channels. This is where oil is created.  The faults are probably where fields will be discovered. In the future, fault interpretation may become a new research area and topic, leading to the discovery of significant fields in the region."
To read the full article, please log in
Authorization
or register.