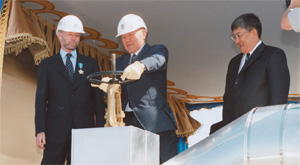 As a geologist working in the oil and gas industry, I was fortunate to pay my first visit to Kazakhstan in August 1991, just as the Soviet Union was falling apart. I liked the country so much I decided to live there, as the country manager for a UK multinational, first in Almaty in 1995, and then to the new capital, Astana. We left in 2004, but I was to return as a regulator visitor in 2013, working for another oil company.
August 1991 was a very difficult situation for many people in Kazakhstan. Our host at that time was Academician Abdulin, VP of the Academy of Sciences. He was very protective and showed great Kazakh hospitality to our group of three: a female Irish geophysicist, an American geologist and myself. We were a long way away from our comfortable home office in Houston, but all felt the excitement of seeing the tension in the dying USSR at first hand.
Moving to Almaty with the family introduced us all to the wonderful Tien Shan mountains on the door step of the Alatau Sanatorium (our first home) with its endlessly long corridors and wonderful views from the rooms we occupied. The chef frequently prepared cucumbers; thin slices in the morning with breakfast, thicker at lunchtime and pieces that looked like they had been chopped by an axe in the evening. He usually had someone help him walk round the dining room when he came out to meet guests in the evening, presumably after some liquid refreshment.
On more serious matters, Kazakhstan’s large and historic oil and gas industry was in serious need of investment. Negotiating contracts to develop existing fields was a painstaking process: the two sides had very different approaches, and trust was slow to develop. A a result, it would take up to five years for the final signatures to be made on some of the big projects.
As BG Kazakhstan Country Manager (British Gas was transiting to BG Group at the time) it was a very special time. I had the opportunity to contribute to the company’s projects; especially Karachaganak and the North Caspian Consortium (until BG transferred its interest in 2004). In addition, I had the privilege of joining several industry bodies in the country: the Kazakhstan Petroleum Association as founding Chairman, the Kazakhstan Foreign Investors Council Association as Chairman, and the Foreign Investors Council as a moderator for some sessions. The Investors Council was instrumental in helping create a positive investment climate in the country; with the guidance of President Nazarbayev and support from the EBRD (the European Bank for Reconstruction and Development), this forum continues to flourish, and remains an important forum for foreign investors and the RoK to address current issues.
The precursor to the Kazakhstan Petroleum Association had been a lunch group that discussed industry issues and included long serving people in the country such as Rick Hudson of Amoco, lawyer Marla Valdez and Bob Williams of Chevron. Later KPA Chairmen included briefly Ed Verona of Texaco and then Sagindyk Nuraliev, of BP, who held the position for a number of years. 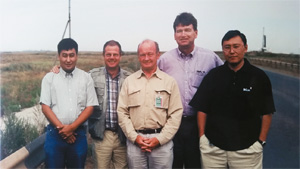 During the chaotic mid-1990s, the country had to deal with numerous economic problems, including shortages of aviation kerosene. Travel to the town of Aksai, in Uralsk Oblast, which was and still is the headquarters of the Karachaganak project, was frequently disrupted by the cancellation of flights or re-routed aircraft due to bad weather or lack of fuel. A result, a much more reliable route to Karachaganak was to take train No 8 from Almaty to Moscow and disembark at a little station called ‘Kazakhstan’ in Aksai. It was a relaxing way to travel and see the country in its full splendour, allowing me to appreciate its size and the various climatic and agricultural zones – as well as meeting interesting characters on the way. And, unlike my home country, the trains always ran on time!
There is one episode that stands out from that time: the then BG CEO, David Varney, flew into Almaty for a country visit. After meet staff in Almaty, the plan was to fly David to Astana to meet with government people. Unfortunately, bad weather prevented the plane from landing in Astana, so the destination was switched to Uralsk at the last minute. Unfortunately, a ‘buran’ (major snowstorm) intervened and prevented us from landing – once again. The plane was then refuelled in Aktyubinsk (Aktobe), flew on to Atyrau and left the BG Kazakhstan staff to make their way back to Almaty alone without David, who took a plane directly to Europe. David said he was slightly disappointed not have met his Kazakh hosts; but he had had “a unique opportunity to see both the size of the country and the difficult climatic challenges in operating in Kazakhstan”.
Looking for adventure, I drove across Kazakhstan several times, with both western and Kazakh colleagues, from Almaty to Aksai, to the Karachaganak field, and once from Astana via Kokshetau and Kustanai. These were real eye-openers for us all, with the incredible wheat belts of the north especially memorable. Another area of economic importance to Kazakhstan then, now and for the future
Work on Karachaganak and its second stage of development moved into full swing after the PSA contract was signed in 1997 and it was one of the world’s largest gas condensate field developments ever. Up to 26,000 people were involved in the project and the full field production was inaugurated by President Nazarbayev in 2003 together with John Morrow, the General Director of Karachaganak Petroleum Operating.
Overall, it was a great pleasure and exciting time to have lived and worked in Kazakhstan. The Kazakh hospitality and wonderful people I met, through both work and leisure, made it a high point in a career in one of the world’s greatest industries. To observe Kazakhstan develop its industry, as well as the peoples’ living standards and society, in a positive way was a unique opportunity.
And finally, today I am fortunate to remain involved with Kazakhstan through the British Kazakh Society (www.bksoc.org.uk) and helping organise thought-provoking seminars on today’s business environment.