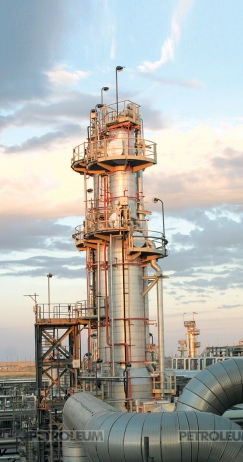 Currently, the national company KazMunayGas is a vertically-integrated oil and gas producer performing the complete cyclical turnaround of operations ranging from exploration and production of hydrocarbons, their transportation and processing to rendering specialized services.

The KMG group of comprises 243 companies, where 78 companies operate in the sector of exploration and production, 47 companies deal with transportation of hydrocarbons, 66 companies are involved in oil processing and marketing, and 52 are auxiliary support service companies. The current position of the company on the market can be characterized by such figures: the share of KMG in oil and gas condensate production accounts for 26.4%; the share in oil processing is 83.2%; pipeline oil transportation share is 67%; pipeline gas transportation share is 95.7%.

Apart from this, KazMunayGas, which is one of the country’s major tax payers, paid more than 259 billion tenge of taxes last year to the national and local budgets. In 2012 the share of KMG in the GDP of Kazakhstan was 3.7%, and the consolidated proceeds of the group of KMG companies accounted for 9.8%.

In 2012 consolidated production of oil and gas condensate across the group of NC KazMunayGas JSC companies was 21.4 million tons, which was 2.4% lower than the planned performance. The drop of production was observed in the performance of KMG subsidiary KazMunayGas Exploration & Production JSC and Tengizchevroil LLP where the National Company KMG holds a 20% participation interest.

According to the updated information, as shown by the operation results of the first six months of this year, the consolidated volume of oil and gas condensate production by NC KazMunayGas JSC including the contributed shares of production by subsidiary and jointly-controlled organizations totaled 11.2 million tons, and as compared to the same period of 2012 the consolidated production by NC KMG has increased by 802 thousand tons or by 7.7%. To a greatest extent this increase of production was predetermined by the acquisition of a 10-percent participation interest in the international consortium Karachaganak Petroleum Operating B.V. (KPO B.V.), and also by the growth of oil production by most producing enterprises within the group of NC KMG companies.

In the future the main prospects of oil production growth in Kazakhstan are connected with these three giants. KMG is a partner in all the three projects and it will contribute to their further efficient development and growth of production during the contract and post-contract period, subject to unconditional compliance with work safety and environmental requirements.

In 2012 development strategy of KazMunayGas was approved for the period until 2022. The strategy is aimed to assure maximal benefits for Kazakhstan. It is planned to expand and intensify geological exploration both onshore and offshore so as to increase reserves and oil and gas production, diversify transportation of hydrocarbons, increase the processing capacities of the oil refinery and improve the quality of petroleum products, and also to establish an efficient system of corporate management. Moreover, KMG has developed and approved a special Plan of Stabilization Measures for the years 2013 through 2015 if the oil prices at global markets drop below 80 US dollars.

In this way, the company is ready for actions, which will maximally alleviate consequences of such course of events. By 2022 KazMunayGas is planning to reach 1.4 billion tons in the volume of hydrocarbon reserves, and to bring production of crude oil and gas condensate up to 35.4 million tons a year, and oil processing – up to 21 million tons.

The economic position of NC KazMunayGas JSC and that of Kazakhstan in general is much determined by efficiency of exploration and development of hydrocarbon fields, which are situated on its territory, their production rates and further processing of crude hydrocarbons. Currently, most of the developed oil and gas fields are found at their mature phase of development, and the volume of reserves in the newly discovered and explored fields in 20-30 years will not assure retention of production at the current level.

Therefore, KazMunayGas for the first time during the years of Kazakhstan independence initiated studies on the project of Comprehensive Study of Sedimentary Basins of the Republic of Kazakhstan in 2009. Using own manpower and services of geological experts, during 3 years the company has conducted a large scope of works and obtained new results, generated updated geological models for all 15 sedimentary basins of Kazakhstan, delineated new oil- and gas-prospective zones and complexes, estimated hydrocarbon resources under the categories D1 and D2, and delineated prospective blocks for geological prospecting and exploratory operations. Moreover, the completed high-precision digital aerial magnetic survey of the Caspian Depression is unprecedented in the Post-Soviet area and it is the first contribution of KMG into the creation of the state reserve of crude hydrocarbons in Kazakhstan.

As early as at the beginning of the next year the national company is anticipating a discovery of a major deposit within the limits of Uzen-Zhetybai stage of Mangyshlak basin at depths ranging from 4,500 down to 5,700 m in Triassic-Paleozoic sedimentary rocks, on the basis of an array of the conducted 2D and 3D seismic data acquisition operations and generalized structural model of the Ustyurt-Bozachi and Mangyshlak basins along the onshore and offshore zones of the Caspian Sea.

In accordance with regional zoning of the area, there have been defined new prospects as future assets of the most prospective blocks for preparation and implementation of geological prospecting and exploratory operations. During 2012 the Ministry of Oil and Gas of the Republic of Kazakhstan received 6 applications for conducting direct negotiations on the projects Kansu, Zhazgurly, Urikhtau, Ustyurt, Isatai and Abai. Using its own resources, KMG prepared projects of prospecting works and defended them at the Central Committee for Exploration and Development.

As early as this year it is planned to start aggressive geological prospecting and exploratory operations at the Kansu block, including such activities as re-entry of the previously drilled wells and preparation of new structures for drilling. The operations are planned to be conducted to provide additional volumes of gas for Kazakh Gas Processing Plant and for gas supplies for Mangystau oblast.

As a result of activated exploratory operations during the recent 3 years, positive findings and discoveries were made in the prospect areas Rozhkovskaya, Urikhtau, Tasym South-East and Novobogatinsk South-East (above-salt complex) in the Caspian basin. An optimistic forecast for further deployment of operations is based on the results of drilling in the offshore zone of the Caspian basin within the structures of the Rakushechnoye More and Nursultan within the limits of block N.

New reserves have been incremented as a result of geological exploration of new exploratory blocks and follow-up exploration of the developed fields. Thus, as a result of exploratory operations in the prospect areas of Kairan, Kalamkas offshore, Zhemchuzhiny, Liman, Contractual Block IV and follow-up exploration of the fields East Kumkol, Akshabulak, Tengiz, Kamyshytovyi SW, Zhanatalap, S.Nurzhanov, E.Makat, KMG’s share in the incremental growth of recoverable oil reserves during the period from 2008 till 2013 totaled 77 million tons.

In the near future it is planned to drill 5 prospecting (wild-cat) wells and appraisal wells within the blocks of Satpayev (1 well), Zhambyl (1 well), Zhemchuzhiny (2 wells) and N (1 well). Further strategy of appraisal works is currently defined for block N in the discovered structure of the Rakushechnoye offshore.

In the on-shore zones it is planned to drill deep wells in the prospect area of Urikhtau and, as mentioned previously, at the prospecting blocks of Uzen and Kansu. KazMunayGas is active towards strategic partners. Thus, for instance, negotiations with СNPC are currently ongoing with the view of joint development of the Urikhtau field, and with Eni for joint development of the block Isatai. In 2012 for potential collaboration in exploration and production in the offshore and onshore zones of Kazakhstan KMG has signed memos of understanding with OMV, LUKOIL, Pertamina, PetroVietnam, Union Field Group, Maersk Oil.